Personal Autonomy: When does ‘choice’ for a few mean no real choice for many?

When does ‘choice’ for a few mean no real choice for many?

Personal autonomy—the choosing of the time and manner of one’s death— is fundamental to the euthanasia lobby’s campaign to change the law. But even expressly stating that you don’t wish to be killed by euthanasia, is no guarantee that you won’t.
In Belgium, a review of involuntary euthanasia by Raphael Cohen-Almagor was published in the Journal of Medical Ethics in 2015. It found that 1 in 60 deaths had occurred without the patient’s explicit request. It was more common in the elderly, those in a coma and those with dementia.

In a recent case in the Netherlands, a Dutch woman with dementia had stated in an advance directive that she had wanted to be euthanised when the time came. But when a doctor came to inject her, she said NO three times, and resisted. The doctor put drugs in her coffee to partially sedate her but the woman continued to resist, so her son-in-law held her down while the doctor fatally injected her. Moreover, the patient had also stated that she wanted to decide “when” the time for death had come — which she never did. The termination “choice” was made by the doctor and/or family in violation of the patient’s advance directive.

The doctor involved, Dr Marinou Arends, was prosecuted for allegedly breaking the Dutch euthanasia law, but was cleared by the jury. In April 2020, the Supreme Court of the Netherlands which reviewed the case fully backed Dr Arends’ actions. The Court said that the “doctor did not need to verify the current desire for euthanasia [of the patient]”, effectively denying Dutch patients a last opportunity to change their minds. Dr Arends said after the hearing “It is good to get the confirmation: ‘do it, just do it”, and that she would do it again.

The terrible irony is that allowing euthanasia with the intention of enhancing patient autonomy would actually reduce the autonomy of those who are most vulnerable. Without proper funding for proper care the ability of the poor, the vulnerable and the marginalised to choose palliative care is restricted. It indeed looks like choice for a few will mean Hobson’s choice for the many. 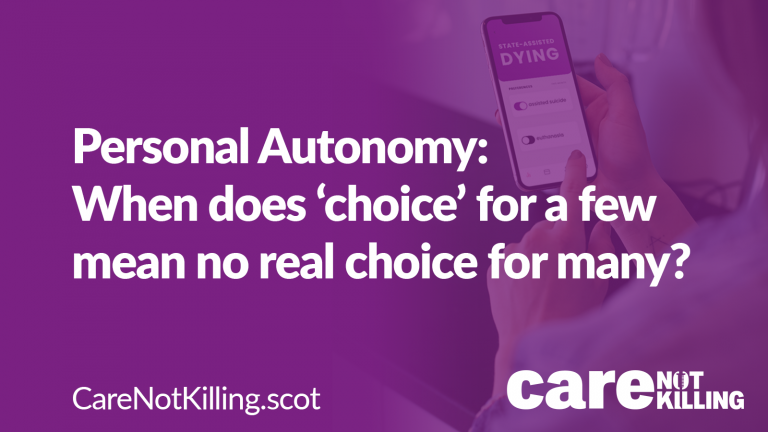 Care Not Killing was set up in 2006 as an alliance of individuals and organisations which brings together disability and human rights groups, healthcare providers, and faith-based bodies, with the aims of promoting more and better palliative care; ensuring that existing laws against euthanasia and assisted suicide are not weakened or repealed; and helping the public to understand the consequences of any further weakening of the law.

Message us via this site

Care Not Killing Scotland is a trading name of CNK Alliance Limited, a Limited Company in England and Wales, Company No. 06360578